Auckland’s Mike Hawkins and his wife Tracey turned a clichéd 90s design into a classic, timeless home that is worthy of its spectacular surroundings.

Order a brochure Enquire About this Product Mike Hawkins is certainly living the life. Now retired, the NZ homeowner spends his time finishing his dream home in the East Coast Bays of Auckland and paddleboarding.

And what a dream home it is – now. Mike and his wife Tracey purchased the home two years ago when it was still an ode to the Tuscan look of the 1990s, planning to modernise the interior, as well as update the external façade and roof.

They loved the bayside location and the fact that behind its dated façade were “good bones” and a whole lot of potential.

Mike explains that like some plaster homes in Auckland, the house didn’t have a code of compliance from the council (“plaster houses in Auckland are pretty hard to sell”, he says) so they always planned to reclad the outside in timber, although the original plan was to simply re-colour the roof.

“We were going to colour the roof, but because the project got so big and out of hand, the plans changed,” he says. “We decided that because we were changing the look to a coastal style – we put weatherboard on, re-windowed, re-guttered – we thought it was just crazy to colour the roof when really the existing tile wasn’t the look that we wanted.

“So then we ended up doing a whole new roof,” he says. “And we are very pleased. It has actually completed the look of the house that we wanted.”

This was also where Monier got involved, says Mike. He and Tracey chose concrete tile Tudor in the colour Hapuka to replace the existing Mediterranean-look concrete tiles, which made the process simpler and more cost-effective because that meant there didn’t have to be changes made to the underlying roofing structure.

“We just decided to go like for like, replacing concrete with concrete,” Mike adds. “We ran with the Monier product, which is actually an Australian tile. I believe we are the first home in Auckland to put this Australian profile on the roof.” 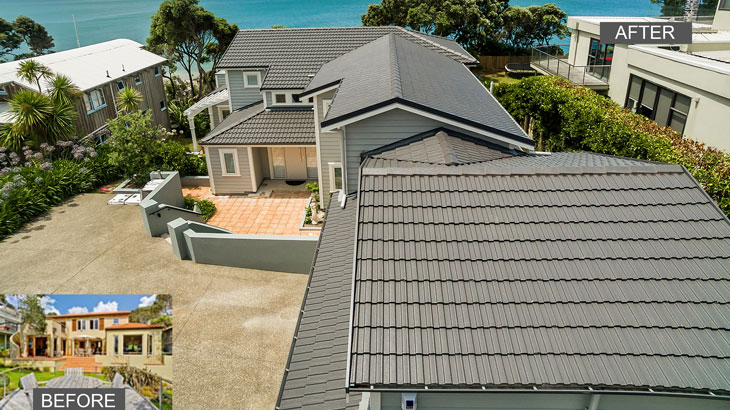 Replacing the whole roof had the added benefit of giving a uniform finish to the structure because during the renovation, the Hawkins family decided to add another bedroom to what was already a rather large house.

“We added a bedroom upstairs between the top storey and the garage loft,” Mike says. “Because it was a big, big house for three bedrooms. And when we walked around the house, everyone said, ‘gosh, it’s a big house, but only three bedrooms’.

“So we added that bedroom in and that was another issue with patching a new roof into that addition and sourcing the same tiles.”

Being that the house is located right next to the ocean, a huge benefit to choosing concrete roof tiles is that they simply do not rust or corrode unlike metal roofing alternatives.

“When it blows a northerly, it will blow us inside out,” Mike adds. “When it blows, some of the metal roofs down here on the bay start to rattle. With a concrete roof you don’t get that.” 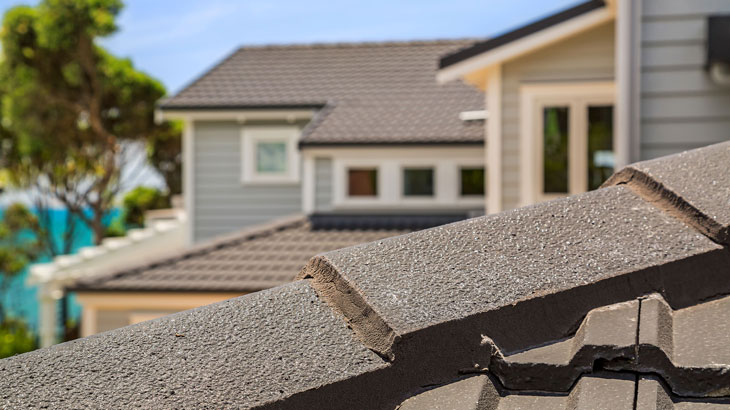 “The house was actually really sound to start with,” he adds. “It must have been quite a tricky house to build, or design in the first place because there were a lot of funny angles in the roof, which is hidden. We just worked with what we had, added on a roof, redid the roof, redid all of the exterior and we renovated the interior.

“The house had a lot of big rooms, but they weren’t connected; it didn’t flow.  So we just pulled walls out and put steel in and sliders. It just opened up all of the lower floor.”

Mike and Tracey’s two sons are grown up now with homes of their own. One lives in the next bay, the other a few bays to the south. It’s a large house for a couple.

“So the two kids have left home and people do wonder why we have got this monster house with just two of us, but that’s the way it goes,” he says with a laugh.

“And I think – never say never, but we will stay here for a long while, that’s for sure. Having gone through the heartache of renovation. I love this house.” 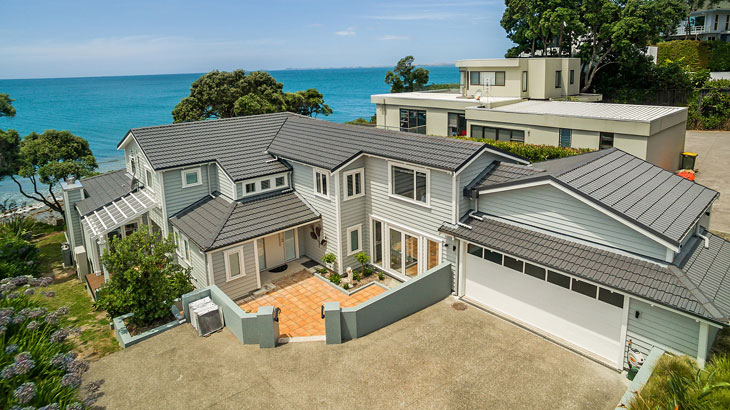 ENQUIRE ABOUT THIS PRODUCT

Thank you contacting us. A member of the Monier team will be in touch with you shortly.

Still not sure? Speak to an expert.

We’re just scratching the surface. There is so much more to understand about roof tiles and this significant investment.

This is where you can go to find out more.

Receive this look in your inbox so you can share it with friends and family.